5 Facts Revealed From The Reconstruction Of The John Kei Group

5 Facts Revealed from the Reconstruction of the John Kei Group 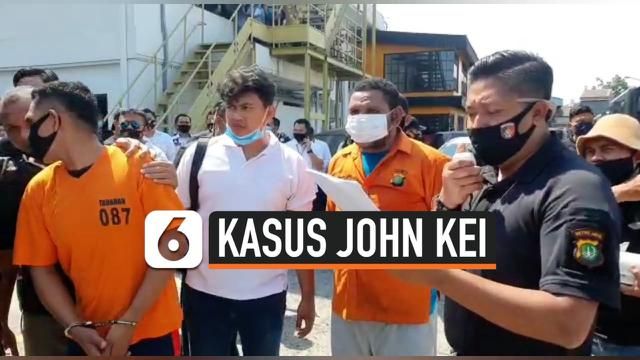 Jakarta - Direskrimum Polda Metro Jaya carried out reconstruction of the persecution and destruction carried out by John Kei's group.

"Today from the Subdit Jatanras will carry out the reconstruction of the John Kei case," Head of Public Relations of the Jakarta Police, Police Commissioner Yusri Yunus told reporters on Monday (6/7/2020).

According to Yusri, the reconstruction scene was not only done in one location, but in three locations.

The scenes that were exhibited included John Kei's meeting with some of his men. At that time, John Kei contacted the suspect Daniel.

Following are the facts revealed from the reconstruction of the persecution and destruction carried out by the John Kei group on Liputan6.com :

"We will move the TKP in Kosambi to the Jakarta Police Headquarters because we see that the pre-construction situation is very densely populated. In the current pandemic we must keep our distance," said Yusri.

"We will bring 37 suspects in the plan, but we will still look at the situations. We want to match again by bringing friends from the prosecutor's office," Yusri said.

John Kei ordered one of his men to bring Nus Kei to his presence. The request was submitted via telephone.

This was revealed in the reconstruction of a company (PT), in Kelapa Gading, North Jakarta, Monday (7/7/2020).

The scenes that were exhibited included John Kei's meeting with some of his men. At that time, John Kei contacted the suspect Daniel.

"The first scene on Sunday, June 14, 2020 at around 9:00 am WIB, John Kei through his cellphone contacted the suspect Daniel to gather children in this office. The plan will be held at 16:30 West Indonesia Time in the afternoon," said one of the investigators while reading the reconstruction scene at the scene.

John Kei and his men discussed the abduction of Nus Kei. The suspect Daniel was given the confidence to bring Nus Kei before him.

"Then the third scene of the suspect John Kei tells Daniel 'You can take Nus Kei to meet with mom?' "Mom means kaka. Then Daniel answered 'ready mom I can'," the investigator explained.

John Kei wanted to ask for clarification of Nus Kei for his words in a video and the recording was circulated on social media. That remark offended John Kei.

"When the meeting was agreed on Wednesday 17 June the Nus Kei house would come to Green Like City to take responsibility for the insults committed by her live Instagram," the investigator said.

The suspect Daniel provided four vehicles to leave for Nus Kei's residence. That was the closing reconstruction at this location. Next, move to another location.

The John Kei group equipped themselves with several weapons while carrying out attacks and persecution to the Nus Kei Group.

The weapons were distributed by two suspects, Arnol and Daniel in Arcici, Cempaka Putih, Central Jakarta.

In the scene scene, the first suspect Daniel relinquishes instructions from John Kei regarding the plan to kill Nus Kei's life.

The suspect Daniel himself was asked to bring Nus Kei to use a Toyota Fortuner that had been prepared.

"Scene 14 of the suspect Daniel continued orders from John Kei for the suspects to kill Nus Kei," said one investigator at the crime scene.

"The suspect Arnol did the distribution of tools in the form of sharp weapons and iron spears that had been sharpened to be distributed to other suspects," said an investigator.

"Hold it just in case, if there are members who come down, make sure to come back. If anyone blocks, hit," said the investigator imitating the scene of giving a firearm by the suspect Daniel.

Then, the group split into two crime scenes. In West Jakarta and at the residence of Nus Kei in Tangerang.