Ahead Of The Youth Pledge Commemoration, This Is Hnw's Hope For The Young Generation

Ahead of the Youth Pledge Commemoration, This Is HNW's Hope for the Young Generation 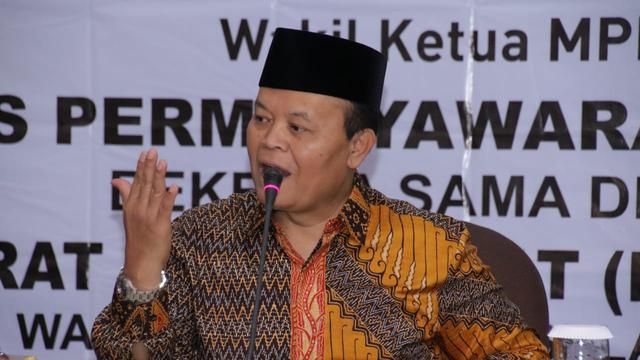 Jakarta - Deputy Chairperson of the Indonesian People's Consultative Assembly, Hidayat Nur Wahid, hopes that ahead of the Youth Pledge on October 28, 2020, today's young generation can emulate young leaders in the era of struggle.

Hidayat Nur Wahid (HNW) said that exactly 92 years ago, namely October 28, 1928 in Batavia (Jakarta) an event occurred which became the great history of the Indonesian nation.

At that time, youths and youth leaders from various regions in Indonesia held the Second Youth Congress which gave birth to a joint pledge to realize the ideals of the establishment of the Indonesian state. This pledge is known as the Youth Pledge . This was quoted from Antara , Sunday (25/10/2020).

He said, there is something worth observing from that incident. For example, the composition of the committee and the leadership of the congress is determined by deliberation so that they are evenly and fairly arranged to accommodate all regions, groups and organizations.

"This proves that they have applied the values of Pancasila which at that time were not yet born. It is also proof, if the noble values of the nation are put forward, the results will be good and useful," said Nur Wahid when he attended and gave a virtual speech at a National / National Figure Gathering in collaboration between the MPR and the Echo of Justice of West Sumatra, in Pariaman City, West Sumatra, Sunday.

The event with the theme of 'Gathering National Unity Towards the Commemoration of the Youth Pledge ' was attended by members of the Echo of Justice, leaders and the surrounding community.

The leader of the MPR from the Prosperous Justice Party (PKS) saw the extraordinary progress of these youths, therefore Indonesia's young generation today must emulate and take lessons from them.

Because, quoting from the Muqaddimah book written by Muslim historian Ibn Khaldun, who stated that history is repetition.

"It is not impossible that the history of the success of youth in that era will repeat itself in the present, in another form, namely maintaining and filling Indonesia's independence," he said.

The factors that need to be observed from the youth leaders, among others, do not think about themselves or their group, the ability to work together, the ability to be trustworthy, put forward deliberation to reach consensus, work hard, support one another, make differences become a the strength to go forward together.

Another factor is that the young leaders are educated, smart, broad-minded, not blind imitators, and not excessive fanaticism.

"All these advantages are important, because without them it is impossible to inspire and raise the spirit of the people to fight hard for independence," he said.

Therefore, HNW invites Indonesian youth to quickly rise up and immediately achieve the success that was achieved by the young national figures before, if possible, they must be better than them.