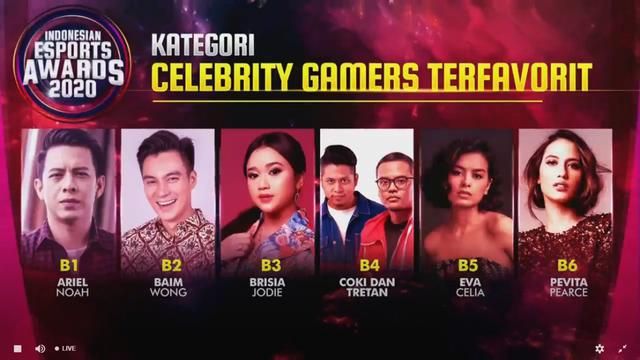 Jakarta Some Indonesian artists are known to be not only good at singing and acting. They are also known to be good at playing games. They include, Ariel NOAH, Baim Wong, Brisia Jodie, Eva Cellia, Coki & Tretan, and Pevita Pearce .

Pevita Pearce and also other artists were nominated at the Indonesian Esports Awards 2020 which was held by a private Indonesian television. They are known to be esports enthusiasts.

"This event is a form of appreciation to Indonesian pro players and those who support the development of Esports in Indonesia and make Indonesia proud in international events. Apart from professional teams and players to gaming content creators, there are also nominees from celebrities such as Ariel Noah, Baim Wong and Pevita Pearce , ”said Managing Director of GTV Valencia Tanoesoedibjo during the press conference for the Indonesian Esports Awards 2020 which was held virtually in Jakarta, recently- recently.

This prestigious award began to open voting since 18 October 2020 and was announced in November 2020.

According to Valencia, organizing this event is also from observing the rapid growth of the Esports creative industry in Indonesia from year to year. Starting from a hobby, esports has now turned into a promising industry and has created many jobs in Indonesia, which has an impact on the growth of the economic sector in Indonesia. This then became one of the webinar topics with the theme "Esports: Between Hobby and Career" that accompanied the press conference.

According to Rangga Danu, the esports industry previously only focused on digital media, but now it has expanded to conventional media such as television, print media and radio. Even though the audience is different, this is where esports plays a role in unifying the mindset.

"We hope that esports is not just playing games but can generate profits, especially to make the nation proud and proud," he said.

The same thing was conveyed by Andrian Pauline, CEO of RRQ and Deputy Secretary General of PB Esports Indonesia who also saw the development of esports in Indonesia.

"The growth of esports in Indonesia is getting faster, as evidenced by the many competitions that are being held. It is also necessary to form a supportive ecosystem outside of the talented esports athletes such as support from the government, the public and especially from the media which plays an important role in growing the esports industry in the country, "he explained.

The nominations for the Indonesia Esports Award 2020 are as follows: