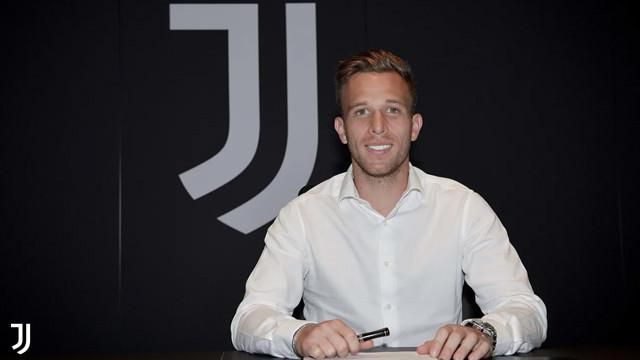 Jakarta Juventus have new players to face the upcoming 2020/2021 season. He is Arthur Mel o, a Brazilian player who brought Juventus from Barcelona has a tag of 72 million euros, or around Rp1, 16 trillion plus 10 million euros, Rp161 billion in the form of various bonus variables.

Indeed, Juventus did not spend that much money because of the arrival of Arthur Melo followed by an agreement to release Miralem Pjanic to Barcelona with a value of 65 million euros, including bonuses. So, Juventus only need to spend around 17 million euros to get Arthur Melo who will turn 24 in August.

Arthur's move to Juventus was not smooth, the player had refused to move because he felt the playing time for Barcelona was still too minimal. However, as negotiations progressed, the player who began his professional career at the Gremio club agreed to move to the Bianconeri and will play with Cristiano Ronaldo.

Following is Arthur Melo's lunge on the international soccer scene before joining Juventus.

Starting a Professional Career at Gremio

The Brazilian player who was born on August 12, 1996 has been a junior player of the Gremio club since 2010. Arthur was promoted from the Gremio youth team to Senior under manager Luiz Felipe Scolari in 2015 when Arthur was 19 years old. In 2017, he began playing regularly for Gremio and also won the Copa Libertadores in 2017 and Campeonato Gaúcho (Top League in Brazil) in 2018. His performances totaled 35 times with 2 goals.

A brilliant game with Gremio made him glimpsed by Barcelona. Moreover, his playing style is often equated with the former Barcelona midfielder and the Spanish national team, Andres Iniesta. Staying digadang became the successor to Iniesta, in July 2018, Barcelona officially introduced Arthur Melo with a tag of 40 million euros which included bonuses and contracts for 6 years.

The contract is not over yet, apparently on June 29, 2020 yesterday, Barcelona officially announced Arthur Melo's move to Juventus with a tag of 72 million euros plus 10 million euros in the form of various bonus variables. The agreement was followed by an exchange of Miralem Pjanić. Both players will join their respective new clubs in the 2020/2021 season competition.

During costumed Barcelona, Arthur Melo has played 48 times with 3 goals, as well as feel the La Liga championship edition 2018/2019.

Arthur Melo is considered a young player who has promising potential in world football. He is a versatile midfielder who is able to play as a playmaker, central midfielder, box to box and even a defensive midfielder.

Arthur's decision to join Juventus won the support of former Brazil coach Felipe Scolari. He said that the Bianconeri was the right club for Arthur.

"Turin is an ideal place for Arthur. It's proof that he played well when he was 18 years old," said Scolari when talking to Gazzetta Dello Sport.

"He plays with his head held high, can provide operands as soon as possible, avoid escort both to himself and the purpose of his operands."

"Physically, he is not very strong. But with an awareness of position, he can cover it. I think his ideal role is the second midfielder in charge of distributing the ball," he continued.

Scolari realized that leaving Barcelona was not an easy matter. But he believes that Arthur will reach the peak of his career when wearing a black and white jersey the pride of Juventus.

"It's never easy leaving Barcelona. He has different expectations and this is why football in Italy is the best option for him," he added.

"I'm sure he can give his best and do it alone, not be forced to change his playing style," he concluded.

Before uniformed Juventus, Arthur Melo still had to play several matches with Barcelona in La Liga, as well as Miralem Pjanic who competed in Serie A. If Pjanic needed Juventus to maintain the top of the league and championship, otherwise Arthur and Barcelona still had to win the top La Liga standings from Real Madrid.

Want to see Arthur Melo's actions treating round skins in the Italian Serie A league? Yes, make sure you have subscribed to an officially licensed broadcast provider so that the satisfaction of watching in every game is not interrupted. Not only that, the ease of transactions to subscribe is also an important factor, one of which accepts payments through digital wallet that is not only fast, but also so easy because it can be done anytime, anywhere.