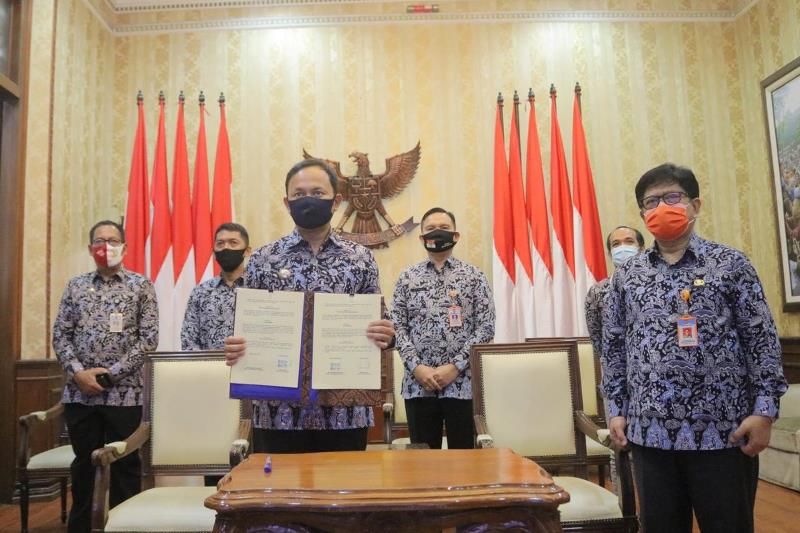 BOGOR - Bogor City is the first city outside Jakarta to collaborate with the Corruption Eradication Commission (KPK) regarding the integration of data or information on Rural and Urban Land and Building Tax (PBB-P2).

The collaboration between the KPK and the Bogor City Government will also produce an accurate database of land and building owners according to the official reporting of the State Officials' Wealth Report (LHKPN).

"This is a new chapter of cooperation between the Bogor City Government and the KPK. This cooperation strengthens the commitment of the City of Bogor to focus on one thing that is a fixed principle and price, namely transparency and anti-corruption," said Bogor Mayor Bima Arya, Friday (7/8/2020).

According to Bima, through this collaboration, it is not only an integrated data sharing, but also two things that can be done at once. First, ensuring that the fight against corruption is endless. Second, it encourages taxpayers to remain obedient, so that it can increase the Bogor Regional Original Revenue (PAD).

Then, transparency is not only in the aspect or dimension of anti-corruption, but also for the efficiency of supporting the wheels of government to run more efficiently and effectively to serve citizens maximally.

In addition, it also helps in maintaining and guarding the intention of the City of Bogor in building a clean and transparent government so that it is maintained.

"Transparency is also for our efficiency and performance. In the end, the people's money will return to the people," said Bima.

Also Read: A Religious Preacher in Bogor is Positive Covid-19

Meanwhile, KPK Deputy for Information and Data, Mochamad Hadiyana, said that the purpose of this collaboration was to succeed in efforts to prevent and prosecute corruption in Indonesia in accordance with Law Number 19 of 2019, Second Amendment to Law Number 30 of 2002 concerning the Corruption Eradication Commission. .

Through mutual cooperation, the exchange of information between the two parties will become more effective and efficient through data technology. Besides helping to prevent and prosecute corruption, the Bogor City Government can also obtain data related to the eradication of corruption, particularly in Bogor City.

"Hopefully the cooperation carried out can be implemented as well as possible together," said Hadiyana.