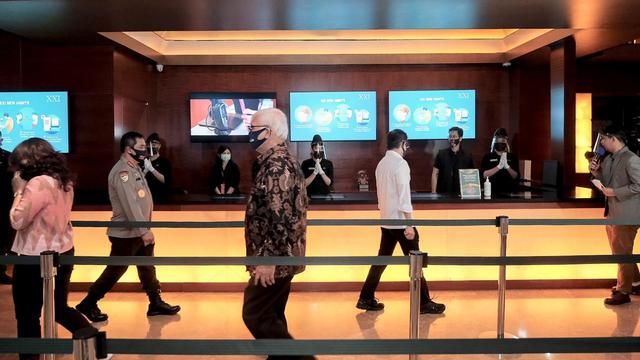 The Cinema XXI Cinema operates again starting Saturday (10/17/2020) by implementing strict health protocols to curb the rate of the number of new cases of Covid-19 infection. Officers and visitors must comply.

This good news was conveyed by the Cinema XXI network through its verified Instragram account on Friday (16/10/2020). The question that then arises in the minds of film lovers, when will the Cinema XXI cinema in Jakarta open?

Rumors have circulated among journalists that cinema entrepreneurs are discussing the reopening of their outlets even though they only have a maximum capacity of 25 percent. The producer reportedly objected to the 25 percent capacity policy.

Chairman of the Association of Indonesian Cinema Entrepreneurs, Djonny Syafruddin, submitted the decision to each cinema in DKI Jakarta. Cinema XXI has finally taken a stand.

" Cinema XXI has received a decree from the Jakarta City Government Tourism and Creative Economy Office. After studying and calculating further, we decided to postpone the opening of our cinema in the capital city , "he explained.

Dewinta Hutagaol then explained the reason for the delay in the operation for this umpteenth time. " One of the obstacles faced is the limited number of films to be shown, both Hollywood films and National films ," explained Dewinta Hutagaol.

Cinema XXI appreciates and is grateful for the hard work that continues to be carried out by the ranks of the Central, Regional Government, health workers and volunteers to control this pandemic.

" Let us pray together so that the situation will get better ," Dewinta Hutagaol invited and reminded that cinemas also contribute to the nation's economy.

The main priority of cinemas at this time is to create a sense of security and comfort for officers as well as cinema lovers. If it operates later, there are a number of health protocols that are implemented and must be obeyed by officers and spectators.