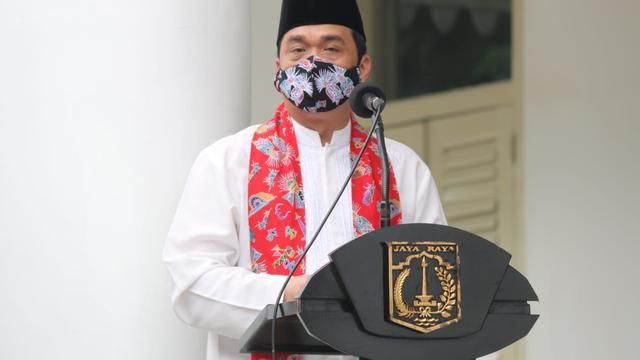 Jakarta - Deputy Governor of DKI Jakarta Ahmad Riza Patria assessed that the meeting held by the DKI Regional Representative Council ( DPRD ) with executives regarding the discussion of the 2020 APBD-changes in Bogor, did not become a new cluster of Covid-19 transmission.

The Gerindra politician said not all of the members who attended the one-day meeting were present. After all, according to him, the meetings were held in different places.

"Oh, no (not becoming a new cluster). Not all members of the DPRD, moreover each commission has a different place," said Riza at City Hall, Thursday (22/10/2020).

Riza said that the location of the meeting held by the DPRD and SKPD is a place that is often used as a meeting location. Asked about the presence or absence of a permit from Jakarta for a meeting in Bogor, Riza admitted that he did not know anything.

"I do not know. But usually why do meetings there, because looking for a more open place. Then, Grand Cempaka is usually used for meetings, "he said.

The Provincial Government (Pemprov) and the DKI Jakarta DPRD are known to have discussed the General Policy Plan for Budget Changes (KUPA) and the Temporary Budget Priorities and Ceiling (PPAS) for the 2020 APBD Amendments in Puncak Bogor, West Java.

The peak is considered to be the right place to prevent the spread of the corona virus or Covid-19.

The meeting was held on Wednesday (21/10) at 09.00 WIB and lasted only one day. Grand Cempaka is considered to be the right place to hold a meeting which was attended by 104 council members and the ranks of regional work units (SKPD).

Acting (Plt) Secretary of the DKI Jakarta Council, Hadameon Aritonang said, during the meeting the window in the room was opened. This is for the existence of air circulation in that location.

In addition, Deputy Chairman of the DKI Jakarta DPRD, M Taufik revealed that the number of meeting participants was so large that the DKI DPRD building on Jalan Kebon Sirih, Central Jakarta was deemed unable to accommodate the attendees.

"Considering this, there are 52 members of the Budget Agency (Banggar), then 70 people are added. Then from the TAPD (Regional Government Budget Team) there are 30 people plus about 100 staff. Now in the office, we can't because we have to be 50 percent. 100 people are not enough, "he said.