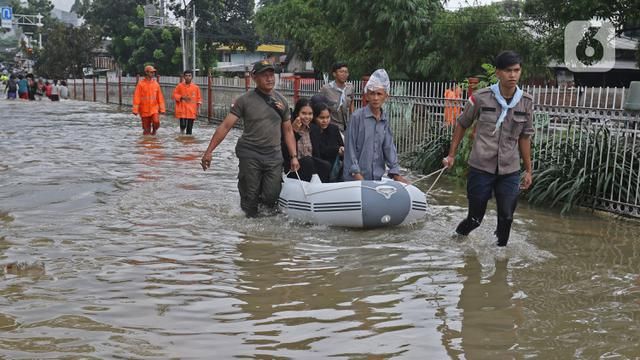 Jakarta - Floods that inundated a number of areas in Bekasi City forced dozens of residents of Pondok Gede Permai Housing (PGP) to evacuate. They were evacuated to a number of evacuation locations that had been prepared by the government.

"There are 80 people who took refuge at PGP at the BNPB post, the others at your relative's house. We can't do anything in the middle of Covid-19," said Head of the Reconstruction and Rehabilitation Section of the Bekasi City BPDB Agency, Hendra when contacted, Sunday (25/10 / 2020).

Hendra stated, residents affected by the flood who had fled also continued to implement the Covid-19 preventive health protocol, starting from maintaining distance to wearing masks.

In addition, he stated, his party was still evacuating residents in a number of other flood locations in Bekasi City, such as Villa Jatirasa.

"The team is still evacuating in the field. We prioritize the evacuation of young children, pregnant women, sick people and the elderly," he explained.

Previously, several houses on the banks of the river that brought the Cileungsi and Cikeas rivers together, Bekasi City, West Java, were flooded early Sunday morning. Average height of 1 to 1.5 meters.

"Some of the affected houses have an average water level of above one meter. The highest is in Villa Jatirasa, a height of 190 centimeters," said Head of Rehabilitation and Reconstruction of the Bekasi City Disaster Management Agency (BPBD) Hendra when contacted by ANTARA from Jakarta, Sunday early morning (25/10/2020).

Hendra said the water level at the meeting point of the Cileungsi and Cikeas rivers was still above normal, reaching 715 centimeters this early Sunday.

The high water in the river path comes from heavy rain in Bogor, West Java, throughout Saturday, October 24, 2020.

The Cikeas and Cileungsi River routes, which originate in Bogor, cross the city of Bekasi and meet in one lane of the Bekasi River.

Some of the housing areas that were affected by the flooding this early Sunday, said Hendra, include Villa Nusa Indah, Kemang Ifi, Pondok Mitra Lestari, Pondok Gede Permai, Villa Jatirasa, and other settlements along the river route.