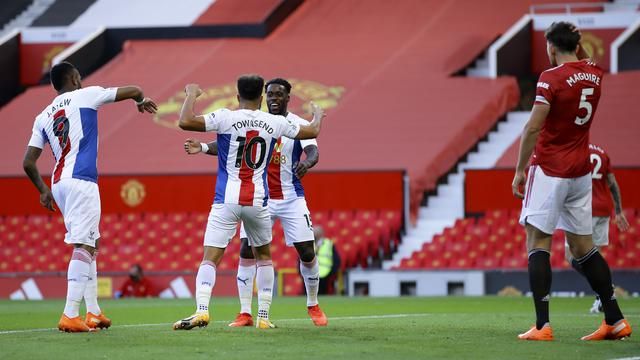 This defeat made MU slumped to position 16. MU itself just played in the Premier League in the second week. The Red Devils with Manchester City did not play in the first week of last week.

Palace made a perfect start despite playing at home to opponents. The game has been running for seven minutes, the visitors were able to take the lead through winger Andros Townsend who completed Jeffrey Schlupp's pass.

MU tried hard to immediately reply to this fast goal. Paul Pogba got the opportunity in the 21st minute. However, his shot was easily secured by goalkeeper David Guaita.

MU again had a golden opportunity five minutes later. This time it was Bruno Fernandes' kick which Guaita was able to counterbalance.

MU hopes to get a penalty in the 42nd minute. But after checking the VAR, the referee only awarded a free kick.

A goal down in the first half forced Solskjaer to put Greenwood on for Daniel James after halftime.

MU can only create dangerous opportunities in the second half when the game runs for an hour. Unfortunately Greenwood's header missed the target, though the machine was free standing.

Six minutes later Palace scored again through Zaha. Luckily for MU, this goal was disallowed by the referee after checking VAR.

Disaster befell MU in 72 minutes. The referee awarded a penalty due to Victor Lindelof handball. The penalty that Ayew executed could still be pushed over by De Gea.

Unfortunately for MU, the referee asked for a repeated penalty because De Gea had already moved. Palace replaced the executor. Zaha took the penalty this time. Zaha coldly fulfilled his duty. MU 0, Palace 2.

MU was finally able to reduce the gap in 82 minutes. Van de Beek immediately made a goal in his inaugural match in the Premier League. The Dutch man grabbed a wild ball in the Palace penalty box.

But five minutes later Palace returned away. Zaha again broke into the goal of his former club. Zaha tricked Lindelof before releasing a low shot at De Gea's goal.