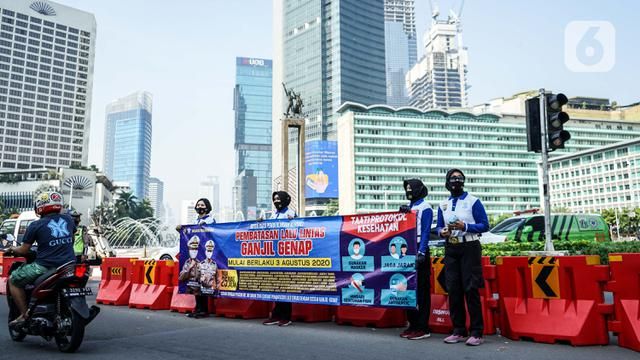 Jakarta - Dirlantas Polda Metro Jaya Kombes Sambodo Purnomo asserted that his party had not taken action against even odd violators in the Jakarta area within the first three days. According to him, sanctions were only given in the form of a reprimand as a socialization step to re-operate the even-odd policy rule for cars.

"We are from the Directorate of Metro Jaya Police Traffic, first we support the enterprising. Secondly, to carry out the even odd violations action, then we convey that during these 3 days we will carry out socialization first," said Sambodo when met at the Jalan Bundaaran Hotel Indonesia section , Jakarta, Sunday (2/8/2020).

The socialization, continued Sambodo, took place tomorrow, August 3 to August 5, 2020. It means, for three days, the action would not be ticketed, either manually or etle.

"But on Thursday, together with the completion of the compliant operation, on August 6, we will only take action against vehicles that violate even odd regulations, both manually and electronically," said Sambodo.

Sambodo hopes, the first three days of the re-socialization period the return of odd-numbered policies can even instill awareness for four-wheelers.

He asserted, members in the field were ready to reprimand and warn if drivers carrying cars did not match the number plates with the date on that day.

"For three days we will re-instill an understanding that even odd is in effect and later on Thursday we will only take action," Sambodo said.