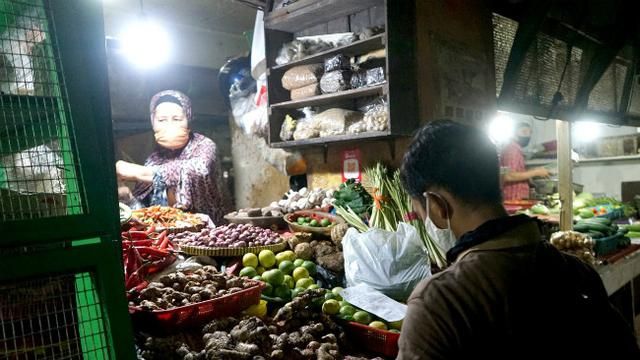 Jakarta - Surabaya City Government (Pemkot) together with the Police and the TNI held a compliant raids on masks to traditional markets spread across 31 subdistricts of Surabaya , East Java on Monday (6/7/2020).

The joint raid, which took place simultaneously earlier this week, targeted traders and visitors who did not comply with health protocols wearing masks.

Deputy Secretary of the Surabaya City Covid-19 Task Force for the Acceleration of Handling, Irvan Widyanto said that the mask-obedient raid simultaneously took place in 31 sub-districts in Surabaya .

"From the data that comes in, we inventory nearly 80-90 percent of traders or buyers who have masked. Indeed there are some who still do not use masks," Irvan said in Surabaya City Hall, as quoted from the Surabaya.go.id page

Irvan asserted, for residents who were found to be violating health protocols not using masks, the officers immediately gave sanctions. Starting from administrative sanctions confiscation of KTP, to social sanctions. "Immediately we give sanctions, start confiscation of ID cards, push-ups, then sweep the streets and there are also those who sing Indonesia Raya like that," he said.

Besides diligently compliant raids on masks on the market, Irvan said, the enforcement of health protocols was also carried out in several other sectors. Such as restaurants, cafes, stalls, to transportation modes. In particular, the sectors assessed for compliance with health protocols were still low.

"In addition to markets, there are hangouts, places to eat, cafes, angkringan, warkop and modes of transportation, such as lyn transportation, online motorbike taxi and so on," he said.

Meanwhile, Rungkut Sub-District Head of Surabaya, Yanu Mardianto said, the joint raids that took place in his area were targeting several traditional markets. One of them is the two big markets in the region, Soponyono Market and Pahing Market.

"For Soponyono Market, both traders and buyers use masks. While in Pahing Market there are still some visitors who do not wear them. Actually, he (the visitor) carries a mask, but keeps it in his pants pocket," Yanu said closely.

"The result is that about 80 percent of people are already obedient to wearing masks. Those who (don't wear masks) do not mean they don't bring it, but they don't wear it, maybe they have finished eating.

Meanwhile, the Director of Engineering and Business, PD Pasar Surya Muhibuddin revealed, in general from several markets that had been visited by a team from the sub-district, village, police and military, 99 percent both traders and visitors were wearing masks.

Indeed, all markets have not yet been visited. However, from the results this morning, around 99 percent of traders and market visitors managed by PD Pasar Surya already wear masks, "Muhibuddin said.

Even so, Muhibuddin admitted, there were indeed those who violated not wearing masks, but the numbers were minimal. For these offenders, they are social dissections. For example, asked to sweep the market aisle, dancing, singing, memorizing Pancasila and push-ups. However, there is also a confiscation of KTP confiscation.

"The sanction is to provide a deterrent effect," he said.