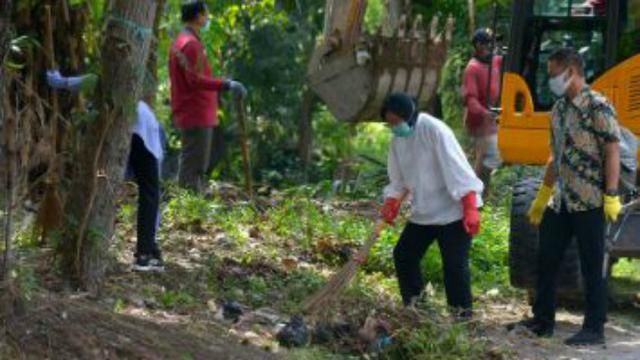 Jakarta - The City Government (Pemkot) of Surabaya continues to beautify the Kalibokor area. Surabaya Mayor Tri Rismaharini (Risma) together with his staff of community service in the area, Tuesday (4/8/2020). This time the voluntary work was held along the Kalibokor River.

Arriving at the location, Risma immediately took a broom, gloves and rattan basket and rushed to start sweeping the riverbank. Occasionally, he gives direction to his staff to do tree cutting at several points.

In addition, he also asked the Bina Marga Public Works and Pematusan staff to dredge the Kalibokor River. In fact, he also asked to widen the river. "It was dredged and widened," he said.

Meanwhile, Acting Head (Plt) of the Head of the Surabaya Green Cleansing and Open Space Office (DKRTH), Anna Fajriatin said, what was cleared was the area of the Garbage Disposal Site (TPS) where there are still illegal buildings around it.

"So we dismantled the building so that it would be better and he could no longer be there," said Anna on the sidelines of community service.

In addition, he also said, the park area in the area will also be beautified, so that plants that are empty or dead will be replaced greener, so that this area does not become a place for littering.

"Later, it will be planted with Trembesi Trees, protective plants and even Japanese Jasmine, so that the region will really become a place for the creativity of young people in Surabaya," he said.

Therefore, he ensured, from today until the next few days he will plant and clean up the area, including installing some decorative chairs like the ones in other parks in the City of Heroes.

He hoped, after the Kalibokor area had been beautified, there would be no more residents who littered in the area.

"We hope that the residents also feel that they own the park, so they are reluctant to damage or dispose of garbage here," he added.

Head of Public Works Department of Public Works and Pematusan Erna Purnawati said, based on a request from the Mayor of Risma, his office dredged in the Kalibokor River area. Because, the river already looks shallow.

"The dredging has been carried out starting from Hang Tuah, then Ngagel Timur BAT Bridge," said Erna.

In addition, he made sure the Kalibokor River would be widened to the right and left about 3 meters so that the water flow would be smoother. He said, this widening is important to increase the capacity of water channels.

"What is possible to expand the 3 meters along 300 meters, is to increase the capacity of the channel there," he concluded.