The House Of Representatives Asks For The Name Not To Beesheeted, Tito: Later I Think Orders

The House of Representatives Asks for the Name Not to beesheeted, Tito: Later I Think Orders 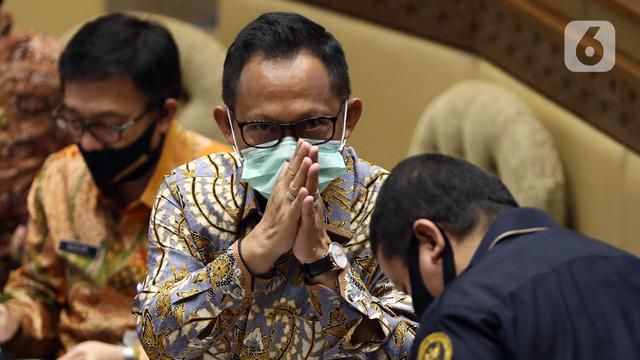 Jakarta - Minister of Home Affairs Tito Karnavian received praise from the Indonesian House of Representatives Commission II during a hearing on Monday (6/29/2020). DPR Commission II member Johan Budi also said that Tito would not be reshuffled by President Jokowi.

Responding to that, Tito Karnavian admitted that he was not comfortable with the compliment. He worried that it was considered as an order.

"Yesterday there was a statement, I was a little uncomfortable, regarding the issue of reshuffle, later I thought there was an order from me. No. I have never asked friends in the DPR to express other opinions, no," said Tito in Parliament, Tuesday (6/30/2020).

Tito Karnavian added, his presence at the DPR meeting was an obligation. The matter of the proposal that he not be reshuffled, according to him is the President's prerogative.

"I strongly believe that all positions are mandated by Allah SWT and the president's prerogative decision. So we must respect whatever it is," he said.

According to the former National Police Chief, the suggestion that he should not be reshuffled was only spontaneous. He said, his job as Minister of Home Affairs only worked and one of them escorted the 2020 elections to be transparent, fair and smooth.

"And God willing, with the new situation Covid-19, hopefully, thanks to the cooperation, we can all take care not to become a medium of Covid-19 transmission. So once again I am just working, the other problems are that the position is in the hands of Allah and the decision Mr. President's prerogative, "concluded Tito Karnavian .

Previously, the House of Representatives Commission II held a Hearing Meeting with Minister of the Interior Tito Karnavian and Minister of Justice and Human Rights Yasonna H Laoly.

The agenda discussed was the mini faction's final opinion on the Draft Bill on the Establishment of Perppu Number 2 of 2020 Regarding Local Election. However, only Tito Karnavian was seen present. While Yasonna sent a letter stating his absence. This angered Commission II.

"The Minister of Home Affairs has shown his extraordinary high commitment together with all of us to be able to oversee the simultaneous implementation of the local elections well, seriously," explained Doli.

Johan Budi then responded and joked. He asked Commission II to send a letter to the President so that Tito would not be reshuffled.

"If Commission II concludes there is a letter of reprimand to the Minister of Law and Human Rights through the President through the DPR, of course, I propose, we also propose that the Minister of Home Affairs not be reshuffled, I think. The problem is that I heard there will be a reshuffle," Johan said.