The Transition Of Rri Cimanggis Land Does Not Harm The State

The Transition of RRI Cimanggis Land Does not Harm the State 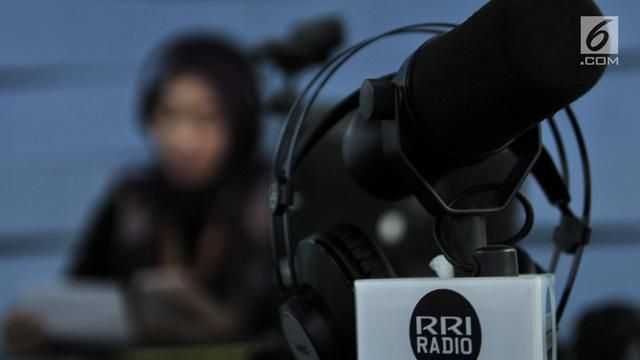 Jakarta - RRI continues to encourage broadcast quality by widening transmit power. One of the steps is to use a digital terrestrial type transmitter. The transformation process uses transmitters in the Digital Radio Mondiale (DRM) consortium based in Geneva, Switzerland.

The advantage of transmitting using this DRM technology is that it allows clearer audio quality compared to the frequency amplitude that has been used by RRI so far.

The DRM technology is in line with the government's commitment to digitize all terrestrial broadcasts in the country. With government support, RRI became a pioneer for this digitization program.

Meanwhile shortwave technology is no longer available. This is because the quality of the recipient is not clear, the operational costs are very large, the producers are difficult to find. In addition, the transmitter area used needs to be very broad and also seems to be inefficient and ineffective.

Therefore, RRI has slowly been preparing to use this digital terrestrial technology to support the transmission of Voice of Indonesia content.

This was done because since before 2016, RRI shortwave broadcasting through the short wave transmitter network at the Cimanggis transmitter complex, West Java, was not carried out optimally.

"The power used at that time was only 10 KW from the initial capacity of 250 KW and it was very difficult to obtain 250 KW SW transmitter parts," said Agus, Head of Technical Department of DIt. New Technology and Media, quoting the RRI website, Wednesday (1/6/2020).

The President Director of RRI, M. Rohanudin explained that the transformation of analog short wave transmission technology into terrestrial does not require extensive land like before.

"The 4.7 hectare land area which has been managed by the state to RRI has been very adequate for the construction of digital terrestrial transmitters - DRM, including for towers , transmitters, buildings and other supporting needs," said Rohanudin.

The area of the RRI Cimanggis transmitter complex which was inaugurated in 1984 by President Soeharto at that time was indeed very large at around 150 hectares.

The area is owned by the state which has been managed by the Ministry of Information cq Electronic Mass Media - Radio Republik Indonesia (RRI) Project.

At that time, LPP RRI was named the Directorate of Radio as a work unit of the Ministry of Information under the Directorate General of Radio, Television and Film (RTF).

Only then since the dissolution of the Ministry of Information by President KH Abdurrahman Wahid in 1999, the Directorate of Radio was transformed into a State-Owned Enterprise - RRI Bureau.

Furthermore, with the ratification of Law 32 of 2002 and PP 12 of 2005 RRI became the Republic of Indonesia's Public Radio Broadcasting Institute.

"Referring to PP 12 of 2005 article 33 paragraph (1) it is stated that RRI's assets are state assets that are not separated ..., so all RRI's assets are actually state assets. RRI only manages assets with the status of USE rights and not as owners," explained Director of HR and General LPP RRI, Nurhanudin.

With this Right of Use status, it is the state's authority to hand over its management to other agencies or ministries according to their needs and designation.

In addition to the transmitting complex, RRI employees at the Central Office in Jakarta at the suggestion of the then Director of Radio Suryanta Saleh and with the approval of the Ministry of Finance also obtained the release of state rights over a piece of land into a private property.

In that area there are also at least 2 thousand permanent and semi-permanent buildings without legal basis.

They occupy the area without any permit from the competent authority. Several times, the area of the CRI Cimanggis complex was also sued by various parties, but failed.

At present the country through the Ministry of Finance cq the Directorate General of State Assets - DJKN handed over the management of a land area of approximately 142 hectares in Cimanggis West Java to the Ministry of Religion of the Republic of Indonesia, cq the International Islamic University of Indonesia (UIII).

As for the development of broadcasting RRI broadcasts based on digital terrestrial technology, a special land area of 4.7 hectares has been prepared which has been handed over by the management to RRI's LPP.

Meanwhile, employees who have obtained usage rights to a parcel of land in the area, can still stay there according to their purpose.

But for the tenants of squatters, they occupy the area without permission so it needs to be controlled by the state.

The Ministry of Religion facilitated a budget for the reduction of RRI transmitter towers in Cimanggis and then placed them in containers that had been prepared.

"The RRI transmitting tower irons are not looted and are still of good quality, so that later they will be used for the construction of transmitters at other RRI stations in the area," said Head of Technical Directorate of TMB Agus.

The development of a plot of land covering an area of approximately 142 hectares in Cimanggis, West Java with the status of State Property (BMN) is currently handed over by its management to the Ministry of Religion of the Republic of Indonesia Cq. Indonesian International Islamic University.

The groundbreaking of the UIII was carried out directly by President Joko Widodo on June 5, 2018.

The establishment of UIII is also inseparable from the desire to increase the recognition of the international academic community for the role of Islam in Indonesia, and to make Indonesia one of the centers of Islamic civilization in the world through paths and levels of higher education that meet international standards.

As a State Legal Institution of Higher Education (PTN-BH) based on Islamic universalism, there are at least a few important things that are important to explain in connection with this UIII.

First, the context and characteristics of Islam in Indonesia as a model of Islamic civilization.

Second, the establishment of UIII as the center of Islamic civilization through education.

Third, the relationship between UIII and the integration of science, especially the perspective of UIII is related to the epistemology of science, study models related to Islam, and the model of institutional development.

Fourth, UIII becomes the center of international studies and research in the development of science.

The construction of the UIII was carried out on a piece of state asset land that was formerly managed by the Republic of Indonesia Radio Public Broadcasting Institution - LPP RRI.

Previously, the RRI transmitter network operated with short wave technology in the land area, for the activity of transmitting Voice of Indonesia broadcast content to foreign countries.

There is content in eight languages produced and transmitted by Voice of Indonesia. But lately, the transmission is not optimal due to constraints in the availability of spare parts and the high cost of operational shortwave transmitters and the poor reception of the content, Voice of Indonesia will switch to digital terrestrial technology.

For RRI, the transfer of state land management status does not cause a principle problem because RRI is indeed developing the use of new digital terrestrial broadcasting technology with a land requirement that is not large, only around 4.7 hectares.

"We understand this is a national strategic project and RRI's position as the manager of land use rights in the Radio transmitter complex in Cimanggis, RRI is actually not the owner of the land. The owner is the state and the state hands over its management to the agencies that really need it, "said the Director of Human Resources and General LPP RRI. Nurhanudin.

President Director of Radio Republik Indonesia, M. Rohanudin explained that the transfer of land rights had also received a recommendation from the House of Representatives Commission I in the conclusion of the Hearing-RDP-March 29 2017 hearing led by Maj. Gen. (ret.) TB Hasanudin who had been conducting surveillance and budgeting of RRI.

One of the points is that Commission I agreed to support the use of RRI's LPP land in Cimanggis for the construction of the Indonesia-Islamic International University-UIII.

In point 1 it is stated that in principle the Supervisory Board can understand the application for the transfer of land BMN status in the RRI Cimanggis Transmitter complex, for the planned establishment of the International Islamic University of Indonesia, because basically the RRI land in Cimanggis is a State Property that can be converted into function in accordance with PP No. 27 of 2014 concerning Management of State Property.

"Minutes of Handover. - BAST on a piece of land with the status of the Right to Use State Property - BMN in Cimanggis, West Java, was conducted by me as the leader of RRI with the Minister of Religion of the Republic of Indonesia, and witnessed by the then Minister of Communication and Information Rudiantara and the Chairperson of the LPP Supervisory Board RRI Mistam, in the Kominfo building, Jakarta, "explained RRI Managing Director M. Rohanudin.

The transfer of management status on the piece of land does not cause losses to the state. As the owner of assets, the state transfers its management to the Ministry of Religion cq Indonesian International Islamic University (PP 27/2014).

The state through the government cq the Ministry of Finance is committed to developing RRI broadcasting technology.

According to the DIPA 2020 State Budget, there is a budget allocation from the state of 325 billion rupiah for the development of digital terrestrial technology - DRM as well as the construction of an RRI multi-media complex in the 4.7 hectare area in Cimanggis which was given its management to RRI.

However, due to Covid-19's condition, the budget allocation was used for refocusing the finance ministry.

"From the beginning, the State Budget DIPA was 325 billion rupiah, which was used for refocusing by the finance ministry at 237 billion. The rest can still be used for the development of digital terrestrial transmitters - DRM for the purposes of international broadcasting Voice of Indonesia, "explained RRI Finance Director, Hari Sudarjanto.

It will also prove to many people that RRI's international broadcasts still air and can be heard more clearly through digital terrestrial transmissions supported by technology in the network.

Another plus with this technology is the ability to detect the position and the number of listeners in real digital based countries.

"Thus the international broadcast of RRI through Voice of Indonesia as part of the second track of diplomacy will be further confirmed after this," said M. Rohanudin.