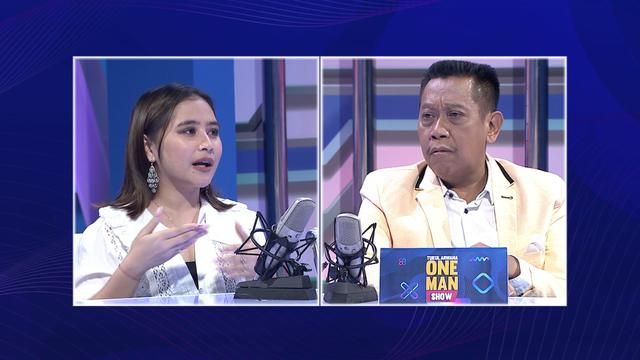 Jakarta At the end of June 2020, Indosiar presents the latest event that will be excellent. Success is known as a television station that has a myriad of the best talent search programs to FTV programs that cling to the hearts of viewers, Indosiar is now back to making a breakthrough by presenting the latest variety show titled Tukul Arwana One Man Show .

According to the program headline, Tukul Arwana was the host of the talkshow. Tukul Arwana One Man Show is present every night. The premiere episode aired Monday (6/29/2020?) Last night the live began at 22:45 WIB.

In fact, many incidents in the community became viral. Because of the controversy and even being able to inspire goodness and trigger optimism, this is the weight of each episode of the Tukul Arwana One Man Show .

Through fresh babble and joking style Tukul as the host is expected to have another side of everything that happens on the Tukul OneMan Show stage will be revealed with the interviewees. "Tukul's unique perspective will invite our laughter," added Harsiwi Achmad, SCM Programming Director quoted from the press release received by the editor.

Tukul Arwana One Man Show raised a variety of interesting themes, ranging from controversy videos that became trending, presenting a number of artists with melancholy stories, unique crazy rich stories experienced by a person, to mysterious events that are not infrequently also become a popular public conversation.

On the inaugural episode of Monday night two guest stars, Prilly Latuconsina and businessman Ahmad Sahroni, were guest stars on the "Tukul Arwana Show". Prilly recently was discussed in cyberspace thanks to the success of being able to buy a luxury home worth Rp 20 billion.

This time Prilly "Young & Rich" did not hesitate to tell his struggle to become successful as it is now to Tukul Arwana. After everything can be achieved, Prilly still has such a noble dream.

"Besides being able to continue working, I also want to be able to help many people. I believe that God gives more fortune and also has a certain purpose, so I want to have an orphan foundation so that I can help more people, "said Prilly Latuconsina.

As a lively talkshow, there was music and songs displayed on the sidelines of Tukul's interview with the resource person. D'Band accompaniment featuring mixed music nuances with a beautiful sinden named Memes enlivened the program "Tukul Arwana One Man Show".

As usual there is an interesting interaction between Tukul, who teases Memes with his funny style. Besides Prilly Latuconsina, another inspiring figure was also present last night namely "Crazy Rich Tanjung Priok" Ahmad Sahroni. Starting from working as a driver, Ahmad Sahroni has now become a successful entrepreneur and owns an oil company.

Despite living in a narrow alley in the Tanjung Priok area, North Jakarta, Ahmad Sahron's house successfully amazed netizens with his luxury. He also told the key to his success so far to Tukul Arwana.

"Continue to work hard smartly and don't stop to dream until you are motivated. After being motivated will be an extraordinary work. After becoming extraordinary, then do good to more people, ”Ahmad Sahroni said.